College Football Experts … and a Cockatiel

The Case for Cockatiels as College Football Experts

A Jock, a Coach, and a Publisher

There is also a former coach (and player) featured on College Gameday: Lee Corso. Although Corso turns 80 this year, he is the Gameday personality who dons the iconic headgear of the team he predicts will win (SU) the college football matchup du jour. Like Herbstreit, Coach Corso has access to coaches, athletes, practices, etc. Surely he should be considered one of the college football experts, right? Out of Coach Corso’s 243 “headgear” predictions (again, SU and NOT against-the-spread predictions), he has been correct 68.72% of the time.

Phil Steele publishes an annual college football preseason magazine that has become the most popular of its kind. He is or has been on the committees to select some of college football’s most prestigious awards including (but not limited to): the All-American Team, the Heisman Trophy, the Lombardi Award, the Biletnikoff Award, the Outland Trophy, the Jim Thorpe Award, the Lou Groza Award, and the Doak Walker Award. Is it any wonder that many consider Phil Steele one of the college football experts? Steele appears on a number of television and radio programs where listeners can get some of his college football predictions. Once again, Gameday Cole has tracked 463 of Steele’s SU (and NOT against-the-spread) predictions. Steele’s straight-up winning rate is 71.06%.

Suppose that (again, not predicting games against-the-spread) the college football “experts” just predicted the favorite would win the game, no matter who was playing at any location and under any circumstances. In other words, imagine a cockatiel trained to say just two words: “The favorite.” Now imagine asking that cockatiel who would win any college football game. Over the past 10 seasons of college football, the cockatiel would have had a winning rate of 76.05%! You read that correctly: Favorites (of any kind) over the past 10 seasons won their games outright (SU) 76.05% of the time, making that cockatiel more accurate than Kirk Herbstreit, Lee Corso, and Phil Steele. The results of these college football “experts” are shown in graphic form, below: 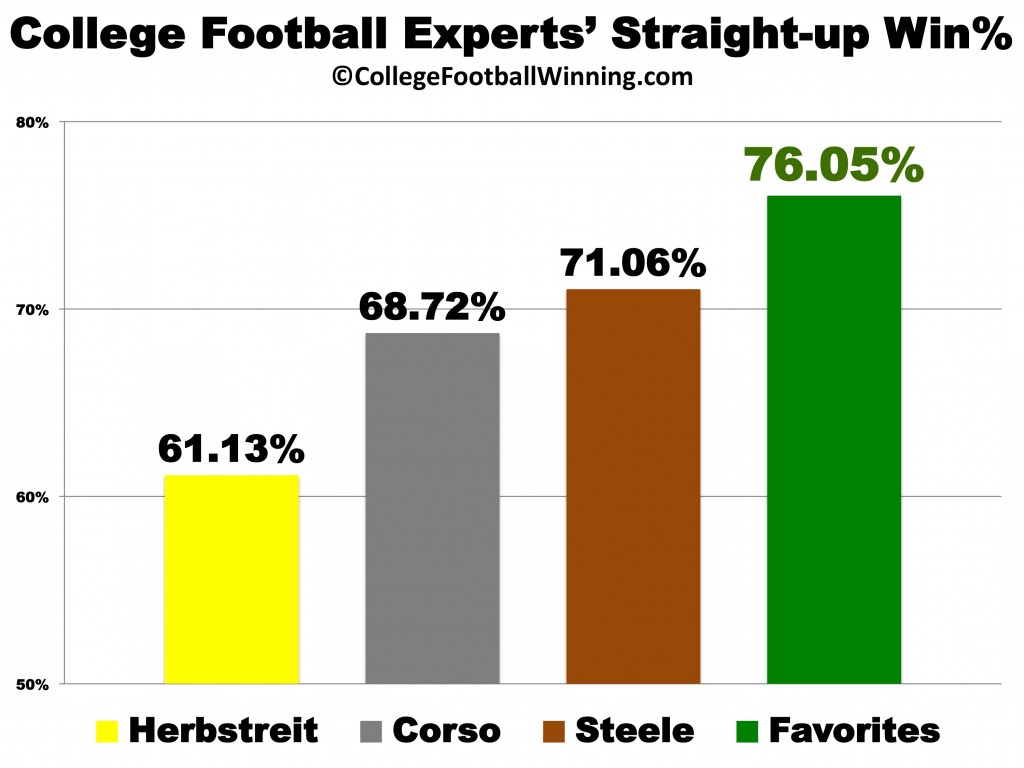 Since we are solely focused on college football betting analysis, we think we know what you are thinking: Why not bet only on favorites? After all, they won SU at a rate of 76.05%. Betting on favorites TO BEAT THE SPREAD would have been a losing strategy: Those same favorites that won straight-up at the rate of 76.05% only beat the spread 49.72% of the time, which means that betting $1,100 (to win $1,000) on every college football favorite over the past 10 years would have amounted to a loss of $431,600. One might (and should) conclude what every legitimate sports bettor knows: picking straight-up winners is much easier than picking against-the-spread winners. That conclusion is obvious, but answering our thesis question, Who are the real college football experts?, is less obvious. At CollegeFootballWinning.com, we think that we can prove quantitatively that we are college football experts at against-the-spread analysis. As for the popular pundits who many consider college football experts, the next time you hear a series of predictions from them, see if they know more than a cockatiel.